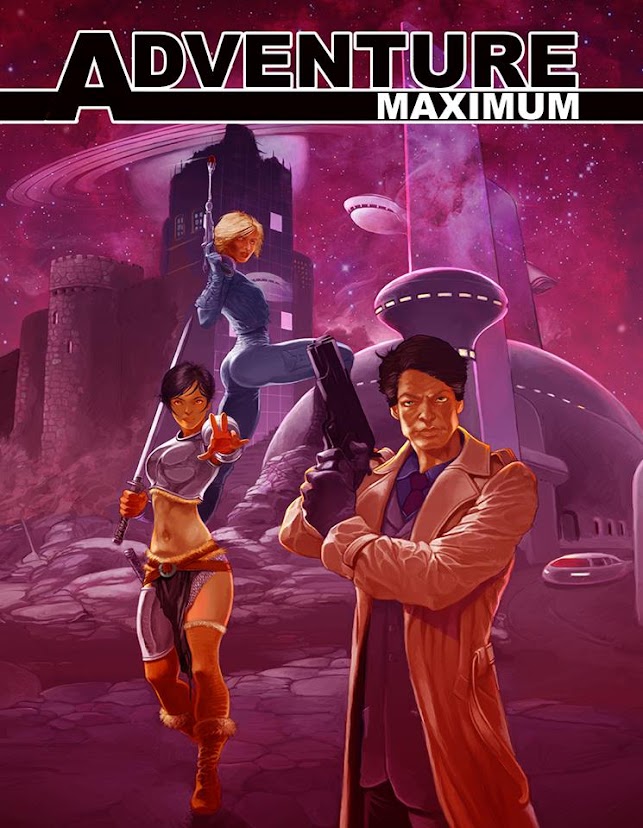 In this blog post we will discuss what makes AM different from so many games out there.

First and foremost AM is not another game setting. It is my personal belief there are more than enough settings and game worlds already on the market. In fact there is too much content and not enough real play ability. Let's face it, how many times have you bought a rule book only to find the game system sucked? The publisher did a good job of enticing you to purchase the book by using slick art and glossy pages. The world setting was imaginative and you couldn't wait to jump right in and start playing,  but you quickly find there is just one drawback. The world setting is tethered to a set of crappy mechanics making the game itself virtually unplayable. I can think of several big time games in the past suffering from this affliction. This is where Adventure Maximum comes in. It is designed from the ground up to be a set of common sense rules that are versatile and easily adaptable to any game setting. You plug AM into those worlds and make them playable or create your own. What's more, it does it all using a single D10!

The core rule book is near completion and will cover these aspects in the rules: 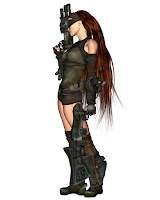 Comprehensive Character Creation: the core rules cover the creation of all basic adventuring characters of various tech levels from primitive to far future. It is handled in easy to learn steps and when completed you will have a fully detailed character complete with attitudes, personality traits, disadvantages, special abilities, etc.


Comprehensive Skill List: There are over 100+ skills described in the game and cover the entire gamut of man's technology levels.

Simple Mechanics: No need to own dozens of dice to play. The system runs on a single D10 to determine the success of any action in the game.

Exciting Combat: Combat in Adventure Maximum is second to none. It has all the detail of the most intricate game systems, but with none of the complexity that bogs the game down. Each character is armed with an arsenal of attack and defense maneuvers such as Parry, Slash, Impale, Death Blow, etc. All aspects of personal combat is covered including martial arts, melee, ranged weapons, and vehicles. There are no Hit Points! Every combatant has 10 Trauma levels until death. It's not the amount of hit points which keeps your character alive in combat, it is a combination of skill, strategy, and luck.

Weapons and Equipment: The rulebook has stats on tons of melee weapons, range weapons, pistols, assault weapons, rifles, shotguns, and launchers. There are rules for custom building your own armor and vehicles. All manner of technology is covered and rules are provided to convert the weapons from other game systems into AM.

Innovative Role Playing: AM encourages excellent role playing by its players and rewards them with something called Luck Points when they do so. These Luck Points are used to give the character a much needed edge in the game when surviving combat damage or giving a Skill Rank a boost. There is a saying in AM that becomes readily apparent to those who play the game: "Earn to Burn."

Innovative Campaign Play: Just like no hit points, AM doesn't use experience points either. The system for improving in the game is very simple. The player keeps track of the number of games his or her character is played. Every 5 games the character gets to improve. It's that simple. The system encourages players attendance as they can easily keep track of their character improvement.

This is just some of the features covered in the core rulebook. Feel free to join the Adventure Maximum Facebook Page to learn more. The link is listed below. Also give this blog a follow as more aspects to these exciting rules will be covered in the future.

What is the Adventure Maximum RPG System?


I discovered rpg gaming in 1979 quite by accident. Up to that time I had been playing various wargames and boardgames mostly produced by SPI and Steve Jackson's pocket games like Rivets and Warp War. I picked up a copy of 1st edition Gamma World thinking it was a boardgame. I took it home and looked through the rules, and upon realizing it wasn't a wargame, tossed it in the corner of my bedroom thinking I had been ripped off. At that time I was twenty-four and a voracious reader of fantasy, horror, and men's action novels. My dream was to be the next Stephen King and spent a lot of time alone plunking away on my typewriter with one story or another. Three weeks later I cleaned up my bedroom (a rare occurrence for me as a bachelor) and discovered the box Gamma world set I had discarded like rubbish in one corner. It still piqued my interest so I took another look through the rules but couldn't make sense of how it was played. Where were the cardboard chits of units and soldiers? What were all these strange dice (at that time you had to color the numbers with a grease pencil)? Then I turned to the back of the book and read the Example of Play. Boom! A light went off in my mind. In that one instant I knew exactly what type of game it was. I called a friend and asked him and his wife would like to play, grabbed my weird dice and rules, and headed over to his apartment. We rolled up characters on notebook paper (there were no characters sheets back then either) and played a hastily adventure I had put together. It was a blast and from that point on I was hooked and spent the next thirty-years as a GM.

Through the 80's I was a voracious gamer and picked up any system I could afford to get my hands on. I ran a variety of games: D&D, RuneQuest, V&V, Call of Cuthulhu, etc. I gamed three nights a week in my house and ran an Advanced D&D campaign for up to 14 people every Sunday for three years. Though I tried multiple systems, some with merit, something was missing and left me wanting more. I decided to write my own. The first was a rough draft of a superhero game called Super Justice and another one covering martial art fighting. To me the area most lacking in current systems was a feasible gun combat that played like the action movies I loved so much. In 1989 I decided to write my own system to cover those faults. It was titled Blood and Thunder and the basis of what is now Adventure Maximum. With a contemporary setting where you could play vigilantes, cops, spies, mercenaries, etc. it kicked ass with simple, but deadly, gun combat. I even had the cover painted for the rules and was preparing to print my own rulebook.The problem I ran into was that people who played the system loved it so much that they wanted rules for fantasy combat, science fiction, magic, etc. At that time the Universal Game system was the rage. So I decided to make Blood and Thunder universal and call it Adventure Maximum.

I attended my first Gen Con in 1991. I drove sixteen hours to Milwaukee with a carload of gamers and a rough draft of the AM rules. I had purchased a demo table to show off how the rules worked. We ran hundreds of demo combats at the con table to show off the game's versatility. At the time AM was a percentile based system and was well received by those who tried it. At one of these demo sessions a white-haired man wanted to see how the system played. I ran a typical combat for him and when it was done asked him how he liked it. He said it was great, but the percentile dice wasn't needed and could do the whole system using a D10. When he turned an walked away I saw his name tag said Dave Arneson who was the co-creator of Dungeons and Dragons. His advice stuck in my head through the years since because he was right. The whole system could run just as easily using a D10.

I left the convention with the desire to publish the rules myself and return in 92. The next year was spent putting the rule book in print. In those days you didn't have the resources to self publish like you have today. The rules were printed on a word processor and art was done by myself and friends which I had to physically cut and paste into the book. I still stayed with the percentile system and had over 500 books printed by a local printer. That was the whole sum of this game's print run. It was an amateurish looking effort, but my desire was to put something out so people could try it. When we returned in 92 the book sold well even though we had a terrible location for our table. We were also up against Gary Gygax's just released Legendary Journeys, another universal system written by the person credited with creating Dungeons and Dragons. Interest grew for my little game book and I continued going to local game cons and was even the guest of honor at a few. I also produced Gaming Maximum, a amateur magazine which included adventures and rules expansions such as Psionics, Mech Combat, etc for AM. Things were looking good for the game and I was contemplating producing a much improved second edition. 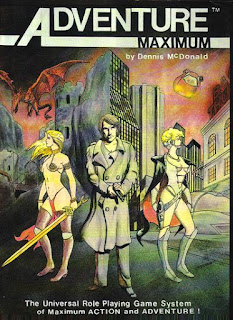 WHAT HAPPENED TO ADVENTURE MAXIMUM?

In 1993 the world of gaming changed with the release of Magic: the Gathering and collectible card gaming. Gamers turned away from the rpg hobby in droves to play and collect cards. Little game companies like mine were left behind in the dust. The years that followed were lean for AM but I persevered and continued gaming and producing a second edition. I skipped Gen Con in 94 and 95 because of the card craze. I returned in 96 with an unfinished draft of the second edition and a lot better art to show. My intent was to pick up a distributor and several showed interest in the new rules though the cards were still going strong. That was the last time I attended Gen Con. In the ensuing years my interest shifted from being a game designer to being an author. I turned my focus on novel writing, and thanks to Amazon, I could self-publish and sell my own books. I produced three horror novels and a fantasy novel which I sell at various sci-fi and horror cons. I did very well and still am writing more. I attribute gaming for making me the author I am today. My thoughts kept returning to the old game book once again. I began to realize that I have a lot more resources today then I did back when I first put AM out in 1992. All the files were still on my computer, though I've lost a few major ones over the years. I decided to re-release AM and sell it alongside my novels on Amazon and at conventions.  The rule book is in production now and is a labor of love on my part. The system also runs on a single D10 thanks to Dave Arneson's suggestion.

In the next blog post I will talk about what makes Adventure Maximum different from other systems.

Posted by Adventure Maximum at 6:40 AM No comments: 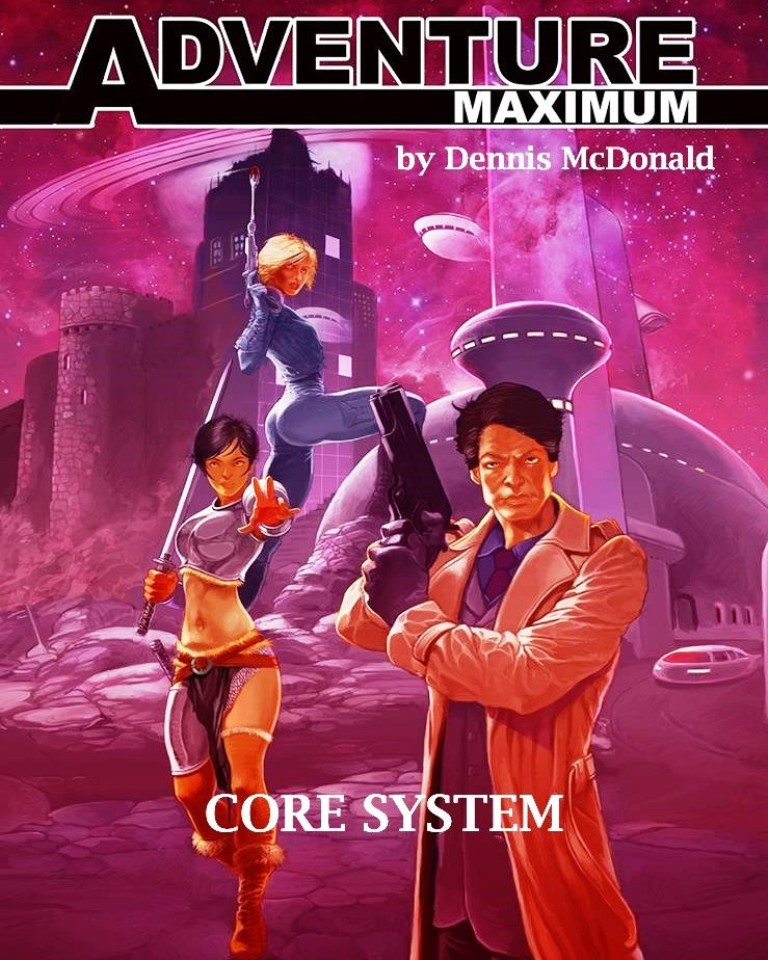 Click the image to follow the link to where you can purchase the rule book on Amazon. 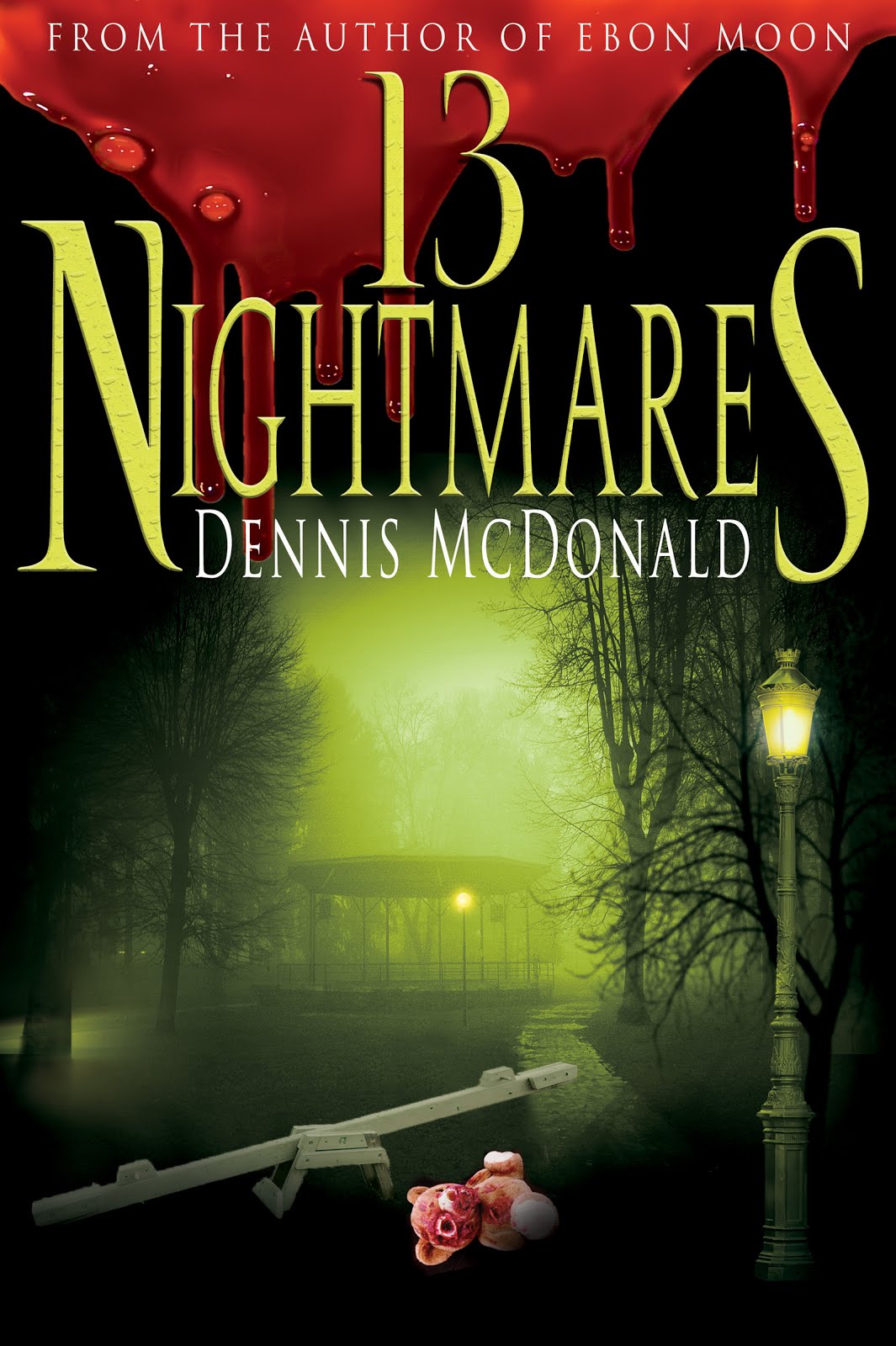 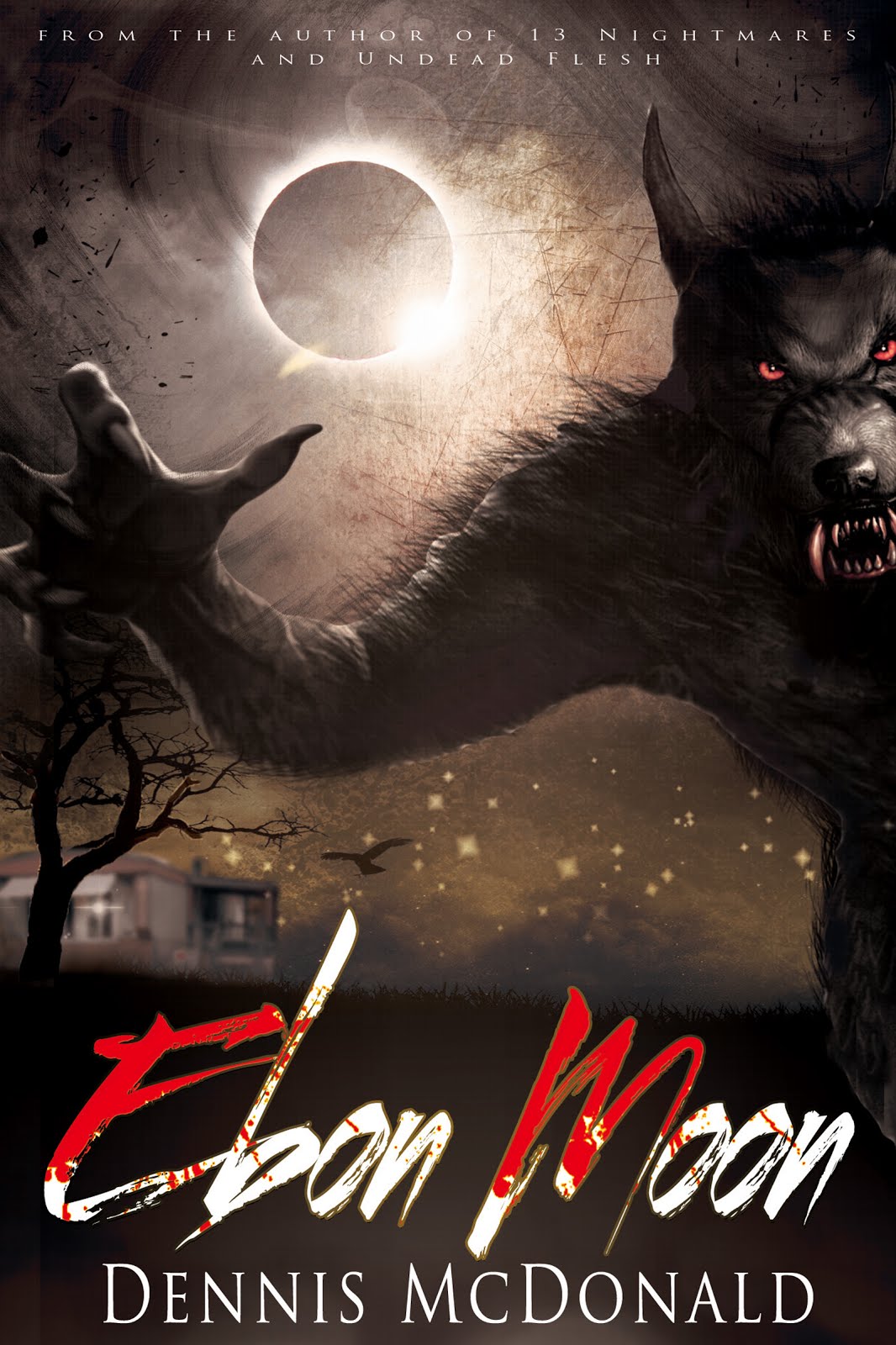 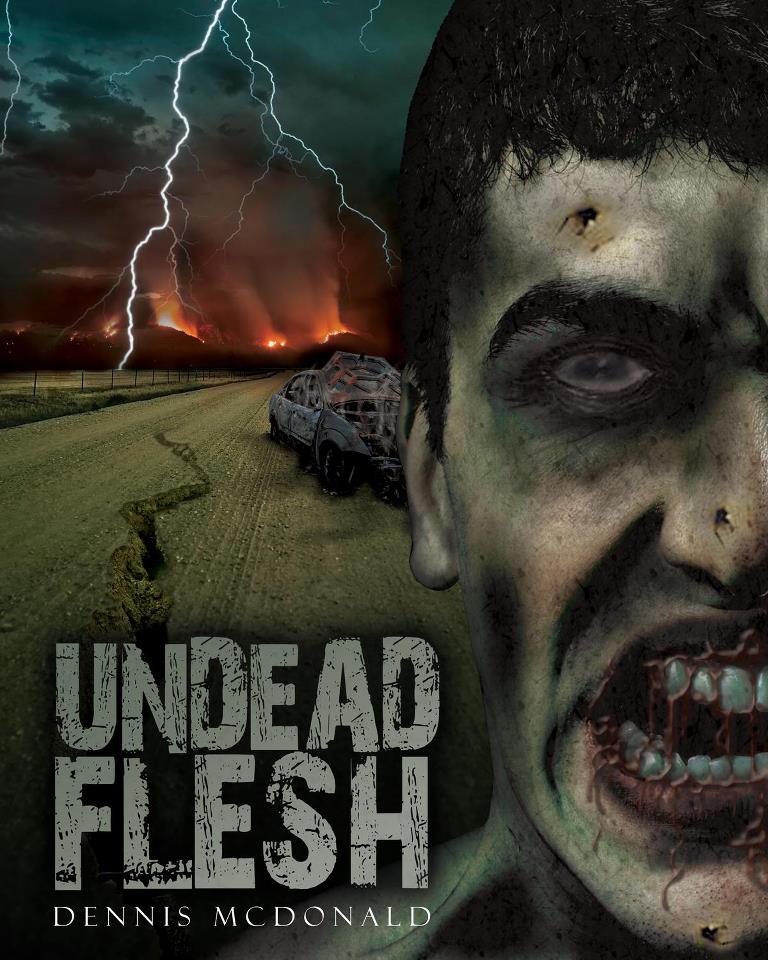 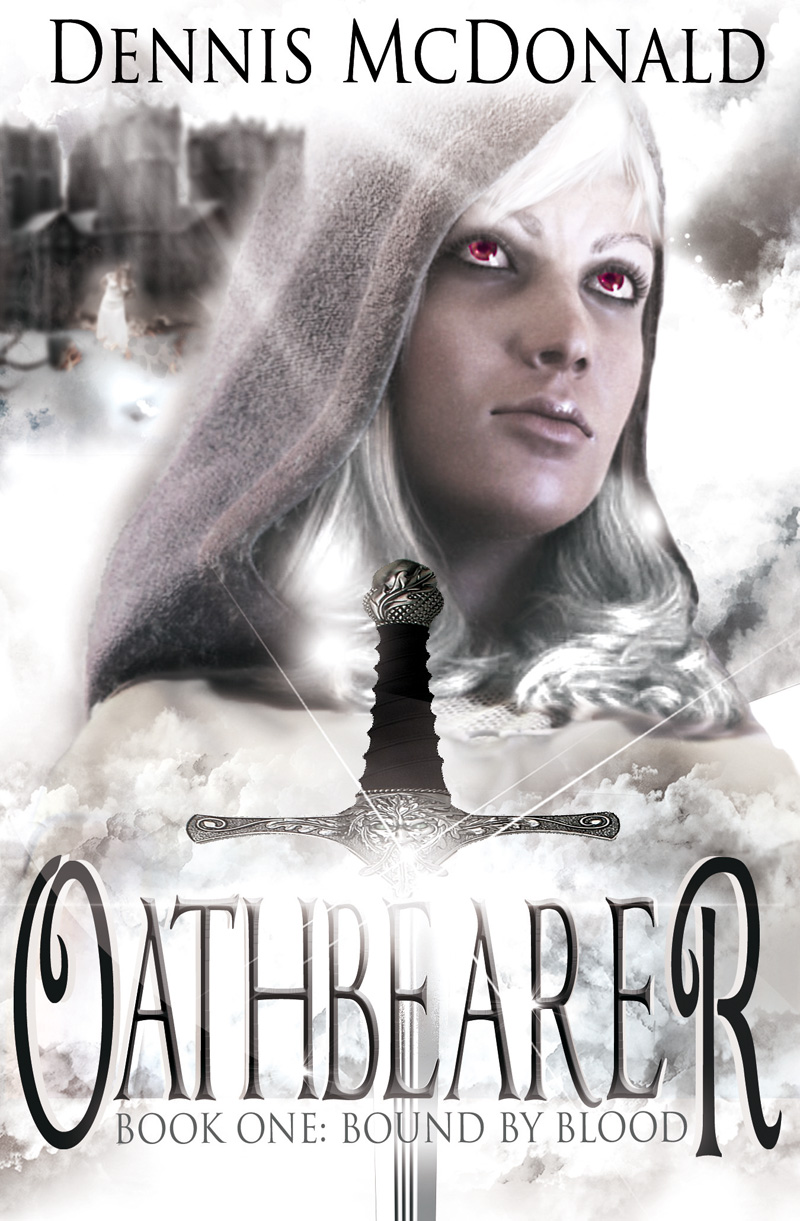